The ruling is in reference to Gilmore v. Gonzales, 06-211, in which millionaire Libertarian Activist John Gilmore (co-founder of the Electronic Frontier Foundation) attempted to force the the federal government to disclose the actual law that requires people traveling by air to either show ID or submit to a more thorough search when passing through airport security.

The justices, by letting the appeals court ruling against Gilmore stand, have legitimized the use of "secret laws" against the citizens of the United States. This means you are now responsible for abiding by laws that are not published, and even classified in some cases.


So, let's review the legal state of the USA:

- You may be thrown in prison for no reason whatsoever, kept there forever if your captors so wish, and there is no requirement what-so-ever that you be charged with any crime at all, ever. (This was the circa 1200 BC right to habeas corpus.)

- Secret Laws that are unknown to everyone are perfectly fine. You as a citizen have no say in what laws are made, and no right to know what the current law is, either. In short, the law is whatever the hell the government wants it to be on the spur of the moment.


Oh yes, the Bill of Rights has also been functionally reduced to: "Soldiers may not be quartered in your house in a time of peace." All those other rights you thought you had? Either gone outright by signing statement fiat (fourth amendment - warrant required for searchs) or marginalized into oblivion (sixth amendment - right to a jury trial). 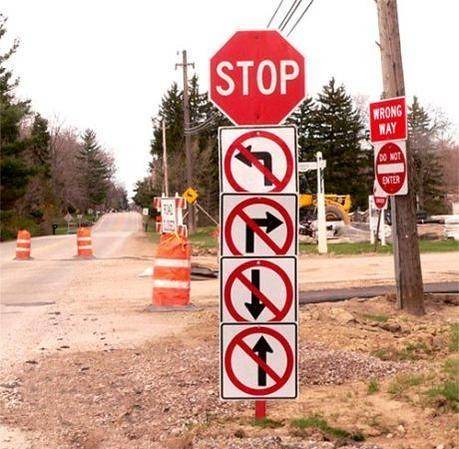 I'm guessing they would have put a "no U turn" sign on there too... if there was room!
Collapse