Nice work — if you can get fired from it.

That's just what one Alan H. Fishman might have thought when he woke up Friday morning.

Fishman was the new chief executive officer for Washingon Mutual — WaMu — the nation's largest savings and loan, which was taken over Thursday night by federal bank regulators and quickly dumped in a fire sale to JPMorgan Chase for the WalMart-like price of $1.9 billion.

But don't cry for Fishman, who reportedly was sky-high (literally) last night, on a flight from New York to Seattle, when WaMu collapsed. Even though he's only been on the job for less than three weeks, he's bailing out with parachute worth close to $20 million, according to an executive compensation analysis conducted for the New York Times by James F. Reda Associates.

Hey, looks like WaMu needs a new CEO! Give me the job, and a "mere" $1 million severance package! I promise I won't make any decisions at all for at least six months! Then you can fire me and get someone competent! It's a win-win! 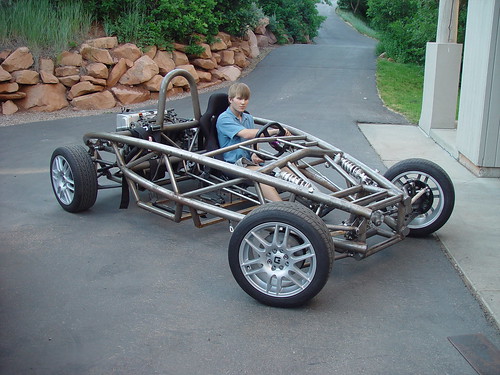 The Ariel Atom is an amazing car and a sure-fire way to lose your license in a hurry, but with a price tag north of 50 grand, it can be tough putting one in your driveway. Unless you build it yourself.

That's just what one enterprising but so far anonymous gearhead in Utah did, cobbling together an impressive copy of the Atom from junk he had lying around. The body was fashioned from an old kayak and a doghouse. The stainless bits were recycled from old appliances, and the throttle assembly was pulled from a Dumpster. It's all attached to a frame that's fashioned from what looks to us like old steel pipe, and the engine was pulled from a junked Acura RSX. The builder, a college student known by his Flickr moniker Proximacentauri, spent 800 hours over the course of 15 months building the car, which offers impressive performance.

Ya know, now that I know how to weld...
Collapse